Cast announced for Burkas and Bacon Butties at VAULT Festival

Tiran Aakel and Shamia Chalabi to star as father and daughter in new comedy play based on Chalabi's real life experiences.

Tiran Aakel (Time’s Up, I was Looking at the Ceiling and then I saw the Sky, Ooh Ah Showab Khan), Haqi Ali (The Attack, Citizen Khan, Jawbone), Shamia Chalabi (Law and Order (UK), Eastenders, Go to Your God Like a Soldier), Holly Joyce (Anti-Matter, Bad Advice, How is Uncle John), Timothy O’Hara (Little Mermaid, Shakespeare in Love, London Wall) and Lisa Zahra (Requiem, The Kite Runner, Before I Leave) star in Burkas and Bacon Butties at VAULT Festival 2018. 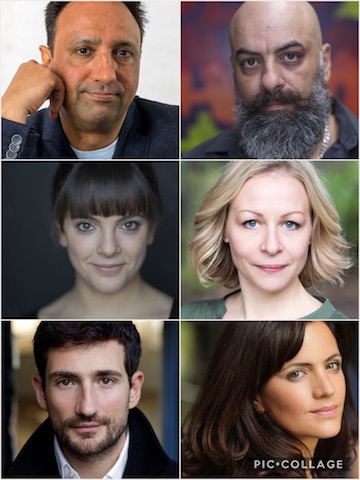 Trained at East 15 Acting School from 1990 to 1993, Tiran is a seasoned actor and has appeared in a variety of Theatre, Radio and TV productions. His very first role out of drama school was Matcham the Butler in Radio 4’s Sherlock Holmes – His Last Bow, playing alongside the late Michael Williams. TV credits include: Mr Roche in Eastenders and Mr Adjani in Casualty. Theatre credits include: Dr Patel in Ray Cooney’s Time’s Up! directed by Ray Cooney, Rick in John Adams’ I was Looking at the Ceiling and then I saw the Sky produced by Southwark Playhouse and Showab Khan in Ooh Ah Showab Khan produced by Arc Theatre.

Haqi spent years on the comedy circuit before turning his hand to acting. His work includes numerous TV, Feature & Short Films and he is now delighted to be back on stage. When not filming he works on bringing theatre to those with little or no access to the arts and works with youth in Birmingham through Martial Arts and theatre to get them off the streets. He also speaks BSL and has written numerous short film scripts that he has self produced in the Midlands area. Companies previously worked for include the RSC, Emu Films, Film 4, Arrondissement Films (Go With God in which he received BATSFF nomination for Best Supporting Actor). Theatre credits include: Purbanat (Castaway Arts), Onation (Motley Theatre & Pals Arts). Screen credits include: The Attack, Citizen Khan (BBC), Jawbone (Emu Films).

Shamia is a London based actress and writer who trained at the Arts Educational Schools London. This is Shamia's first full length play, it is semi-autobiographical and based on some of her personal experiences growing up. Being brought up in London and Wigan she was exposed to a clash of cultures, this alongside her own mix of Egyptian/English heritage opened her eyes to the comedy that can be born out of the need to belong and keep everyone happy. Shamia began writing as a part of Jam Sponge Comedy Group. She has written and played in a variety of sketches in a run of shows at the Leicester Square theatre, followed by a successful and well reviewed summer at The Edinburgh Fringe Festival. Television credits include: Law and Order (UK), Eastenders. Theatre credits include: Go to your God like a soldier (The Old Vic Tunnels/Underbelly), Khadija's 18th (Hackney Empire).

Theatre credits include: And the future will take care of itself and Sunrise (Sheerheight at the Park Theatre), How is Uncle John (Creative Garage at Assembly Hall, Edinburgh), Dead (The Secombe Theatre). TV and film credits include: Thanks for the Memories (Memories Productions Ltd, directed by Amit Gupta), Anti-Matter (Cast Iron Pictures, directed by Keir Burrows), Bad Advice (Greeble, directed by Matthew Lee).

Timothy trained at Webber Douglas and The Royal Central School, since graduating he has worked with some of the best of British creative talent including Guy Richie, Declan Donnellan, Sean Holmes, Edward Bond, Tom Stoppard and Lee Hall. He has just finished the sell-out run of the "deliciously quirky and highly original" (Lyn Gardener) Little Mermaid in Bath which received five star reviews across the board. Theatre credits include: Little Mermaid (original cast, The Egg), Shakespeare in Love (original cast, Noel Coward), London Wall (The Other Palace).

For more information on Burkas and Bacon Butties, click here.