Members of the cast & crew of Land of Our Fathers share their experiences on tour in Wales & England 2015/16.

The best thing about touring a show, rather than staying at one venue, is that it never gets dull. When you're performing a play at the same theatre, week in, week out, for months on end, it's hard to keep everything fresh, and your concentration can slip. But when you're in a new venue every few days you constantly have new challenges to keep you on your toes - the accoustics, the sight-lines of the audience, how to make your way from the dressing-room to the stage without getting lost...

Actually, the first thing we do at a new venue is to find the showers. It's a very dirty show - I mean, REALLY filthy. And the charcoal-dust makeup and baby-oil we use to give ourselves the look of a week's worth of coaldust, grime and sweat is not the easiest thing to remove after a performance. Some venues are very well equipped in this regard - hats off to the Centre which had first class showers - and communal, too, allowing us to form a conga line and scrub each other's backs clean with exfoliating gloves. (Yes, there is a video of this. No, you can't see it). At any rate, we've managed to leave each venue more or less clean and tidy. By which I mean we've been clean and tidy. At this point I really must apologise to whoever has to clean the dressing-room once we leave - even with copious amounts of plastic sheeting on floors and surfaces our grime still manages to get everwhere.

Another bonus of touring is it gives you a chance to visit new places - I'd been to Cardiff before (playing The New Theatre with the RSC and, more recently, Peter Pan Goes Wrong) and Aberystwyth (with The Globe) but it was my first time to Swansea, Carmarthen, Llandudno and Caernarfon. My one regret is that the weather has not been particularly favourable for sightseeing.

Driving through Snowdonia between venues was, however, spectacular - made all the more so by the dramatic mists and storms. And on that subject of driving - full disclosure - I'm not Welsh! (Which, hopefully, comes as a surprise to those of you who have seen the show). Well, okay, I'm half-welsh on my mother's side (she's a valley girl from Abercynon) but all the same, I fear I still manage to mangle some of the place-names while navigating for fellow cast-member Robert as we drive between venues. Fortunately, I'm spared embarrassment as he, a Canadian with Polish ancestry, is by and large no better informed on the correct pronunciation than I am.

Next stop, Mold! Five days (24th to 28th November) at Theatr Clwyd, which should be a wonderful end to the Welsh leg of the tour. We'll also be making an early start on the festive season with Secret Santa gift-giving amongst the cast and crew. Unlike the characters in the show we all get on pretty well (so important when you're on the road for any length of time). As Hovis says in the play "Rhoi nerth i mi i allu byw gyda morons yma." Translation "I'm so lucky to be with this lovely group of people." 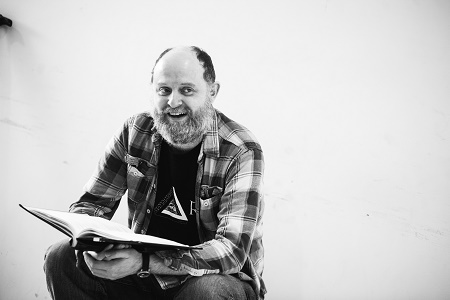 Land of Our Fathers is a play that looks deceptively simple to the eye - it is in fact a massive show with an intricate and beautiful design to match.

My role as Associate Designer is to make sure the new version of the set, costume and props, designed by Signe Beckman, are all in place by the time the get in to the space at Wales Millennium Centre begins. We arrived in Cardiff a week before our opening night to rehearse putting together the set before it heads off on tour, a luxury that allowed us to iron out any problems and make sure we had no surprises later on!
The coal effect that makes up the set is made from what seems like several tons of rubber crumb, which is poured onto the floor and swept up after each venue. Every single element of costume and every prop has to be broken down and dirtied up with 'coal'; once the show begins then the actors assist with this as they are covered in fake coal make up and dirt.
Once moving into the Weston studio we could begin to understand the challenges that touring this show might bring, and what kind of team would be needed to tour it to each venue. Up the set went again, and finally the show had an audience, with only a few last minute finishing touches (mainly painting things black again!) before it was ready for opening night. After running at the Centre for a week the production heads off on tour to some lovely venues across Wales. I will be checking up with the show regularly on it's travels to make sure the coal stays up to scratch, before giving it a full maintenance before the English tour next year. 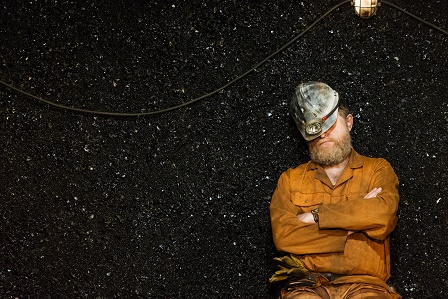 We had a most extraordinary trip to a Welsh coal mine (now a museum) 'Big Pit', not far from Cardiff, on Tuesday of last week. It was informative, inspiring and grounding all at the same time!! We arrived early and were helped into our belts/batteries and helmet/headlamps by the staff, all ex-miners and right from the word get-go, the banter started! It is one thing to feel that a script captures the camaraderie, humour and depth of these men's relationships, but it was riveting to see it personified . Our guide, John, was quite a character, oscillating between humour and information at the drop of a hat while taking us down, down, down in the cage approximately 300 feet below ground. To feel the solid walls around us, then to turn off our lamps and experience the utter blackness of the mine was so helpful in bringing some of the script to reality. Wood beams lined the tunnels and when one was spotted with a crack along it's lower edge, John informed us 'That will need replacing'...museum or not the mine is still 'alive' and as we learned, rock movement is not only from above, as in a collapse, but also the pressures from below cause upheaval. One of the reasons that the job of driving the coal 'trains' below ground was considered so dangerous.

We explored the older part of the mine; learning about the ponies that worked their whole lives underground except for two weeks in the summer when they would be allowed above ground for a 'holiday'; learning that the white dust/powder found along the passages was actually stone dust and was used to suppress fires that might ignite after an explosion; and of course about the dangers of gas build ups (and the different kinds) in mines and the canaries and various lamps used in the past and present to warn miners.
It was humbling and inspiring to hear stories of the lives of miners, to see photographs of the them above and below ground, before and after a shift.The worst mining disaster in history in Wales was when 473 men died in one explosion which was caused they believe by a spark (as John pointed out, no one knows for sure because no one survived). The idea and immediate presence of the dangers around us, when we were below ground, brought moments of the play to frightening reality; the banter a way to cope with the Damocles sword dangling above their heads. The resilience and humanity of these men came to life for us, so it was a trip that will linger in our minds for many years to come! 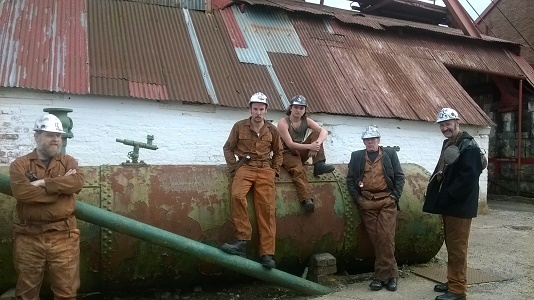 Well, week 3 has been and gone. It seems like only yesterday we began rehearsals. The lines have all (nearly all) gone in and the characters are almost fully formed. The progression for each of us actors has been rather immense. Within a few weeks everyone seems totally at home in the skin of their miner. This is thanks to a lot of hard work from the production team, long days and some spectacular writing...

The play in itself is wonderful. The amazing thing is that Chris manages to write such tasty characters. Each of whom have such wonderful depth, which for an actor is delicious to play. However, with the depth of understanding of these gorgeous characters comes some serious emotion, which the play is soaked in. Because each of these men are so utterly pushed to their limits week three for me has been testing the boundaries emotionally for Curly. Which has been fascinating and rather exhausting.

Roll on Cardiff!! My home town. For more discoveries. Looking forward especially to visiting Big Pit for research before getting into the space and bringing the pit to life! 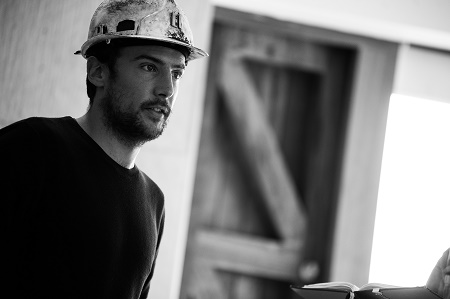 It's odd revisiting a show that I have worked on twice before, I suppose because there was a level of trepidation on that first day of rehearsals, hoping that we could make the show as great as it was in its previous lives. Those fears were very quickly swept aside, pretty much as soon as we sat down to do a table read, as is tradition on the first day.
Our cast is so wonderfully invested in this story, that it has so far made the whole experience an absolute pleasure. We have been able to get the play on its feet straight away, so it gives us a lot more freedom to find new things and create new versions of these brilliant characters. It's now the middle of week two of rehearsals, and we are well on our way to shaping the play into its final form. There's lots of nitty gritty detailing to do now, and I think the actors will be sick of me in a couple of days, as we go over and over lines and really pinpoint crucial parts of the script. But for now, there is peace at basecamp, and I couldn't be happier or more excited about where this play is going! 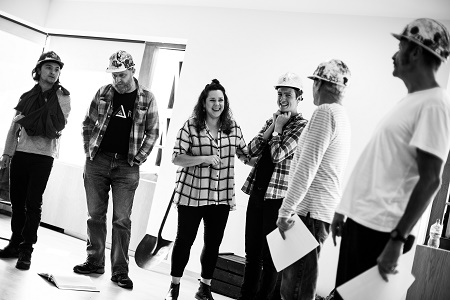